4.1 The LDP spatial strategy, as set out in Section 3 and policy DP/2 of the LDP, distributes residential and employment growth based on the hierarchy of settlements and the preferred spatial distribution of growth. Background Papers BP/8: Hierarchy of Settlements and Settlement Boundaries and BP/37: Growth Distribution Options Report describe the evidence and justification for the strategy chosen.

4.2 The LDP Plan Area covers the area of Conwy County Borough which is outside the Snowdonia National Park. The overarching strategic approach identifies the relative distribution of residential and economic growth between the urban (UDSA) and rural (RDSA) development strategy areas. 85% of growth is allocated to the UDSA (the built-up coastal region and Llanrwst) and 15% to the remaining RDSA. Within the UDSA, the growth is further distributed in accordance with the Hybrid Strategy as explained in BP/37 and shown in Chart 4.1 below. 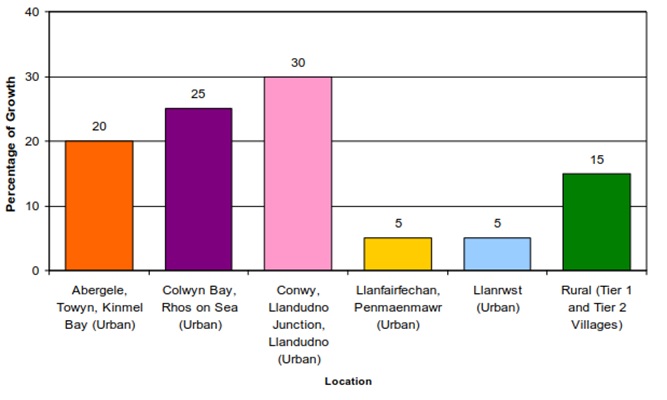 4.3 The residential element of this growth comprises a number of different sources to reach the LDP target of 6520, including completions since the start of the LDP period in 2007; committed sites, allocations, windfall developments and empty homes. Table 4.1 shows the housing supply as it was anticipated at LDP adoption in 2013 and Table 4.2 as it stood based on the 2017 JHLAS. It is important to note that the 2013 table assumes that all allocations are in the land supply over the subsequent 9 years, whereas in table 4.2 the only sites included in the allocations column are those which are in the 5 year supply but have yet to receive planning permission. Any allocations which have received planning permission (except for those units which have been completed) are included in the 'Permissions' column.

(4) 4.4 Key changes to the housing supply since 2013 include the inevitable increase in completions; due to the number of dwellings built during the intervening period. One of the most concerning changes is the significant reduction in windfall. This includes the anticipated dwellings coming forward on small sites (<10) until the end of the Plan Period and is based on previous completions data. A reduction by approximately half would be expected as there are now fewer years remaining until 2022, however the figure has collapsed from 1256 to 271. These projections reflect the reduction in completions on small sites that have been observed since the economic crisis of 2007-08. Details of past completions on small and large sites are listed at Appendix 2 of published JHLAS reports.1

Review of the Spatial Strategy

4.5 In terms of the Spatial Strategy, housing supply falls broadly in line with the preferred option, although anticipated growth of 13.1% in the RDSA is a little weaker than the 15% target of the strategy. In the UDSA, growth in the Conwy, Llandudno & Llandudno Junction; Bay of Colwyn and Llanfairfechan & Penmaenmawr areas has been strong in terms of the proportion of growth expected, whilst Abergele, Towyn & Kinmel Bay and Llanrwst are falling short. In absolute terms however, all areas are below the level required to meet the housing targets for their area, resulting in a land supply shortfall.

4.6 Employment development has been slow throughout the authority, but especially in the rural area. According to the 2016 AMR, 11.7ha employment land has been developed in the UDSA since the start of the LDP period, but none in the RDSA.

(1) 4.7 Many areas of the County Borough have localised flood risk issues affecting development, however in some places this has more serious implications for the wider strategy. In the Abergele, Towyn & Kinmel Bay area, large areas of land (some of which had previously been identified as housing allocations in the 2009 Deposit LDP) were ruled out for development purposes following updated advice from Environment Agency Wales (now NRW). An employment site (Tir Llwyd) has also been affected, having been partially built out with significant infrastructure installed but little prospect of the vacant plots being granted permission for development.

4.8 The previous assessment of the hierarchy of settlements and settlement boundaries (BP/8) was based on sustainability criteria dependent on the community facilities and access to transport of each settlement. Policy CFS/6 - "Safeguarding of Community Facilities outside the Sub-Regional Centre and the Town Centres" has endeavoured to use the planning system to help retain community facilities and the trigger in relation to this policy has not been reached in the 2016 AMR. Some settlements have nevertheless been affected by issues such as the loss of shops and pubs, closure of schools and changes to bus routes.

(7) 4.9 The 2009-based WG population projections on which the LDP growth targets were based did not take into account the effects of the global economic crisis. The projected target of 6520 dwellings used a period of exceptionally high growth to project forward, despite the impact of the subsequent recession on house prices and completions in Conwy being clear. This was an unrealistic target bearing in mind the state of the housing market in North Wales. With each year that CCBC has failed to reach the housing target, the annual requirement for the remainder of the LDP period increases. This issue was exacerbated in 2015 by changes to TAN1 which removed the past build rates method of calculating land supply, which until then had provided a 'sense check' of land supply calculations where the residual method '...indicated land shortages or surpluses, which do not exist in practice.'

(3) 4.10 In February 2014, four months after adoption of the LDP, revised household projections were published by WG based on the 2011 census. As anticipated, these demonstrated a significantly reduced housing requirement, however it has been made clear through a letter from the Minister (April 2014) and changes to PPW (9.2) that local planning authorities should reduce the emphasis given to WG household projections when determining LDP housing requirements, as a number of other material considerations must also be taken into account.

(9) 4.11 As detailed above, a number of significant issues have affected the implementation of the LDP strategy since adoption. It is clear that the LDP Review will need to re-consider both the scale and distribution of growth proposed. The capacity of settlements to absorb additional employment and residential development will need to be assessed in light of the evidence to be collected through the Review.