5.1 This section presents six options for growth over the RLDP period (2018 - 2033). For each option a ﬁgure is given for both the number of new homes and the anticipated number of new jobs over the RLDP period of 15 years (Refer to Table 1). This section should be read alongside the BP01 - Growth Level Options Report and BP18 - Conwy Employment Land Review, which includes an assessment of the impact from Regional Economic Drivers identified in the North Wales Growth Deal and Conwy Economic Strategy.

Current Planning Policy Wales (PPW Edition 9) states at Para 9.2.2 that....the latest Welsh Government local authority level Household Projections for Wales, alongside the latest Local Housing Market Assessment, will form part of the plan's evidence base together with other key issues such as what the plan is seeking to achieve, links between homes and jobs, the need for affordable housing, Welsh language considerations, the provisions of corporate strategies and the deliverability of the plan. Household projections provide estimates of the future numbers of households and are based on population projections and assumptions about household composition and characteristics.

Draft PPW (Edition 10) states at Para 3.24 that.......the latest Welsh Government local authority level Household Projections for Wales, alongside the latest Local Housing Market Assessment (LHMA) and the Well-being plan will form part of the evidence base for the plan. These should be considered together with other key issues such as what the plan is seeking to achieve, links between homes and jobs, the need for affordable housing, Welsh language considerations and the deliverability of the plan. Taking into account the wider economic, social, cultural and environmental factors is a vital part of identifying the housing requirement to create sustainable places and cohesive communities.

In addition, Carl Sargent (Former Minister for Natural Resources) has clarified in his letter of 10 April 2014 that Local Planning Authorities must provide for a level of housing that is based upon all sources of evidence rather than just Welsh Government (WG) household projections. The Council is therefore required to determine this figure based on the emerging evidence base and a variety of relevant issues and considerations. For example, the growth options need to consider how they can contribute sustainably to delivering the jobs requirement and the affordable housing needs identified in the LHMA. In addition, the growth options need to be considered against past delivery and the overall capacity of the construction industry to deliver growth. Such detail will inform the preferred growth option to be consulted on at a later stage in July 2019.

No single growth option is considered preferable at this stage. The figures presented provide an indication of the scale of growth the LDP will potentially need to address, in accordance with demographic statistics and evidence base. It should be noted however that data sets are continually being updated and the emerging plan strategy will need to be flexible enough to allow the LPA to respond to changing demographic circumstances should new household projections and/or economic information become available over the course of the plan preparation.

Table 1 shows the options for the level of housing and employment development that the Plan will need to provide for.

The growth scenarios outlined are based on established data sources and reasoned assumptions on possible future trends. Altogether we have looked at sixteen different growth scenarios - nine based on population change, five based on housing change, and two based on economic/employment change. More information about these projections and the criteria they were judged against are set out in BP01.

After this first round of evidence gathering and analysis, the following scenarios were initially selected for consideration for inclusion in the key stakeholder consultation. A brief assessment of each option is provided below along with a summary of the shortlisted options (Table 1 & 2). Chart 1 below illustrates the growth scenarios alongside other comparative data such as the Council's housing delivery completions from 2017/18, the highest completion rate set in 2007/08 and current LDP annual housing requirements figure.

Option 1 - Population led growth scenario (2017-based 15 year migration trend - Welsh Government methodology
This option is based on an update of the official 2014-based projections, using exactly the same methodology but data updated for the most recent year of population that is available (2017) where appropriate, and extending the trend period to 15 years, to more closely match the length of the RLDP period (2018 - 2033). The migration trend is based on data for the 15 years between 2002/2003 and mid 2016/2017.

This scenario is included as it allows comparison with the officially produced projections which are suggested as a key part of the evidence that should be taken into account when formulating future growth strategies for the RLDP .
In this scenario, though population growth and dwelling requirements broadly match the trends seen in 2011- and 2014-based Welsh Government projections and other population evidence, the impact of the large baby-boomer generation moving out of the working age population is seen in the economic impacts section of table 2 below, which undermine aspirations for jobs growth and economic aspirations in the County Borough.

This scenario produces a higher level of overall population growth than option 1, which leads to a higher dwelling requirement (about 4,050 new dwellings over the plan period or an average of about 270 each year), and allows for economic growth of about 5.2 ha of employment land for 750 new jobs over the Plan period (additional employment land may be needed for replacement or expansion of existing sites).

Option 3 - Population led growth scenario (2017-based 15 year migration trend - propensity methodology)
This scenario has the same methodology as option 2, but uses a 15 year migration trend based on data for the 15 years between 2002/2003 and mid 2016/2017.
This scenario gives higher levels of population and housing growth than option 2 (about 4,950 new dwellings over the plan period or an average of about 330 each year), but is still within the range of recent housing completions figures. It also sees growth in the working age population that helps match aspirations for economic growth for the region , suggesting a need for employment land of about 10.2 ha for 1,450 new jobs over the Plan period (additional employment land may be needed for replacement or expansion of existing sites). Along with other policy approaches to improve the delivery of affordable housing (refer to Topic Paper 1 Housing), this option also contributes approximately 1000 new affordable housing units over the RLDP based on a crude across the board 20% contributions from housing schemes. Topic Paper 1 is also exploring other ways to improve the delivery of affordable housing via various land use and policy mechanisms, the results of which will inform the RLDP Preferred Strategy at a later stage. Further viability work is currently underway via BP10 - Affordable Housing Viability Study, which will also inform future policy.

Option 4 - Employment led projection (Conwy Employment Land Review 'Policy On') 1,850 additional jobs
This 'policy on' growth option of 1,850 jobs is proposed in the Conwy Employment Land Review (ELR) and is based on an assessment of the regional economic drivers identified in the North Wales Growth Deal. The methodology for this growth scenario is different from the traditional projections methodology used in options 1, 2 and 3. Population, household and dwelling impacts are calculated by using a backward iteration methodology which adjusts components of population change (mainly migration levels amongst the working age population and their dependents) to match jobs growth to population growth levels.

This scenario sees similar levels of overall growth to those seen in option 2. It gives dwelling growth within the range of recent completions figures (about 5,250 new dwellings over the Plan period or an average of about 350 each year). Jobs growth of 1,850 helps match aspirations for economic growth for the region, suggesting a need for around 12.6 - 14.3 ha of employment land for new jobs over the Plan period (additional employment land may be needed for replacement or expansion of existing sites).

Option 5 - Employment led projection (Conwy Economic Strategy) - 3,500 additional jobs
This option is based on an aspirational jobs growth of 3.500 as set out in the Conwy Economic Growth Strategy, which is informed by the North Wales Growth Deal. It uses the same methodology as for option 4 but with a level of jobs growth that is about twice the figure seen in that option.

This scenario sees levels of overall growth that are higher than options 1 - 4. It gives dwelling growth which is significantly higher than the levels of housing completions that have been achieved in recent years (about 7,150 new dwellings over the Plan period or an average of about 480 each year). Jobs growth of 3,500 suggests a need for around 18.8 to 24.5 ha of employment land for new jobs over the Plan period (additional employment land may be needed for replacement or expansion of existing sites).

The annual need figure from this calculation was calculated as around 190 households a year (slightly lower than in the 2017 Local Housing Market Assessment). This calculates to a total requirement over the RLDP period of 2850 affordable units. If a level of 20% deliverability is set on total housing development in order to achieve this level of affordable housing, then around 960 dwellings would need to be built each year to meet this level of need. Once a contingency is added to this figure the total annual requirement is around 1,150, which is more than three times the highest level of new housing completions in Conwy County Borough in the last ten years. After seeing the high dwelling impact for this projection (and others based on the same methodology), it was decided to present the figures as evidence in the key stakeholders consultation background papers, but not to pursue this option as a potential growth scenario as dwelling figures of this magnitude would be a significant challenge to deliverability and sustainability goals.

It is important to note that the 'bottom line' affordable housing need figure isn't simply about the requirement to build new homes - it's about households in need. As well as providing new affordable housing, there are a variety of other ways of helping these households which don't require new building - for example through placement within existing social housing stock; the provision of supported purchase schemes such as that provided through the First Steps register; the conversion or adaptation of existing stock to better meet tenants' needs (from stock within both the social sector and the private sector) and through financial support to rent within the private sector (housing benefit). Though some households identified as being in need of help to access affordable housing will be currently without a home, most will have accommodation, albeit in inadequate housing. This does not negate the need to provide a significantly greater number of affordable housing options (particularly as housing costs continue to rise and those with lower incomes are squeezed out of market), but suggests that methods other than building new housing for social and intermediate tenure need to be employed to meet this need. This may include seeking to influence the type of housing that is built to make it more suitable to those who could potentially be housed in market housing if adequate and appropriate housing was available (for example, encouraging builders to provide more smaller dwellings or to apply 'homes for life' standards). Further assessment of the new build need will be undertaken in BP/11 'Affordable Housing Needs Calculation' 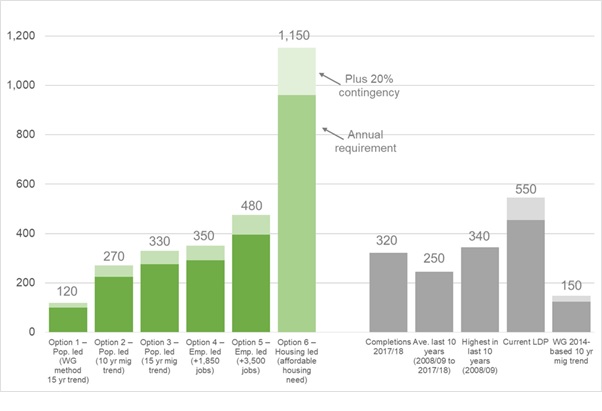 (3) Question 3: Do you agree with the figures and rationale for Growth Option 1?

(3) Question 4: Do you agree with the figures and rationale for Growth Option 2?

(3) Question 5: Do you agree with the figures and rationale for Growth Option 3?

(3) Question 6: Do you agree with the figures and rationale for Growth Option 4?

(3) Question 7: Do you agree with the figures and rationale for Growth Option 5?

(3) Question 8: Do you agree with the figures and rationale for Growth Option 6?

(1) Question 9: What is your preferred growth option as detailed in the options above?

(4) Question 10: Are there any other options we should include?