Option 1 continues with the settlement hierarchy introduced in the LDP and therefore lends itself to a logical option for continuity reasons alone. However the value and reasoning of the UDSA needs to be questioned. It also categorises some satellite settlements which are in close proximity to the main coastal settlements and therefore their synergy and growth rate is restricted. This approach also does not take account of the limitations on the coastal east settlements which are affected by flood risk. 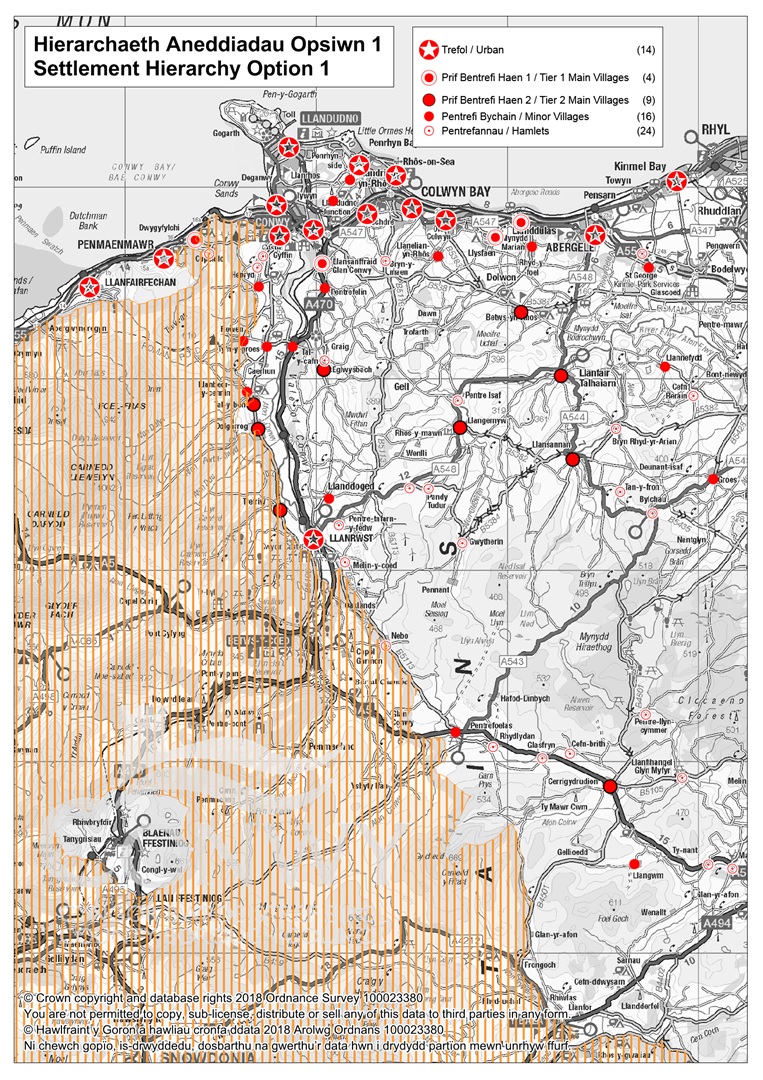 This option brings forward the adopted LDP approach but provides the opportunity to appraise and update the settlement hierarchy. Llanrwst is defined on its own as it is considered unique within the county being a rural service centre serving several outlying villages, both within and outside of the plan area. The urban development strategy area is also removed but the settlements within the hierarchy remain the same. 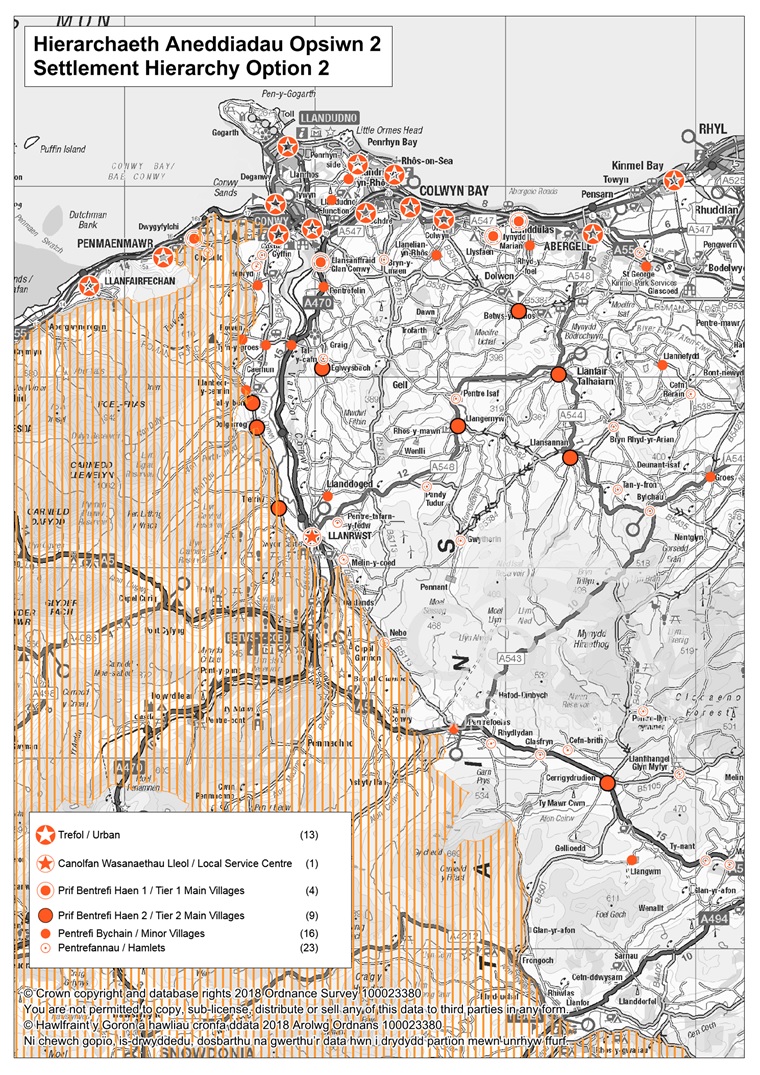 The same approach as in Option 2 above but with adjustments to the categorisation of certain settlements based on their close proximity and functional relationship to higher level urban settlements. For example, whilst some settlements have been classified as rural in the current LDP, some rural settlements fall within urban areas and meet good accessibility criteria to urban areas and as such could accommodate greater growth.

This option modifies the adopted LDP approach by re-classifying some of the Tier 1 Main Villages as Urban Satellite Settlements, due to their close geographical and functional links with urban settlements. This recognises their sustainable location in terms of proximity to transport connections, employment and amenities, whilst acknowledging that the settlements are smaller in scale than the urban areas, and proposed development should reflect this. As with Option 2, Llanrwst is classified as a rural Local Service Centre, rather than as an urban settlement. This is due to its unique position within the county as the main service settlement for a number of outlying villages, both within and outside of the plan area. 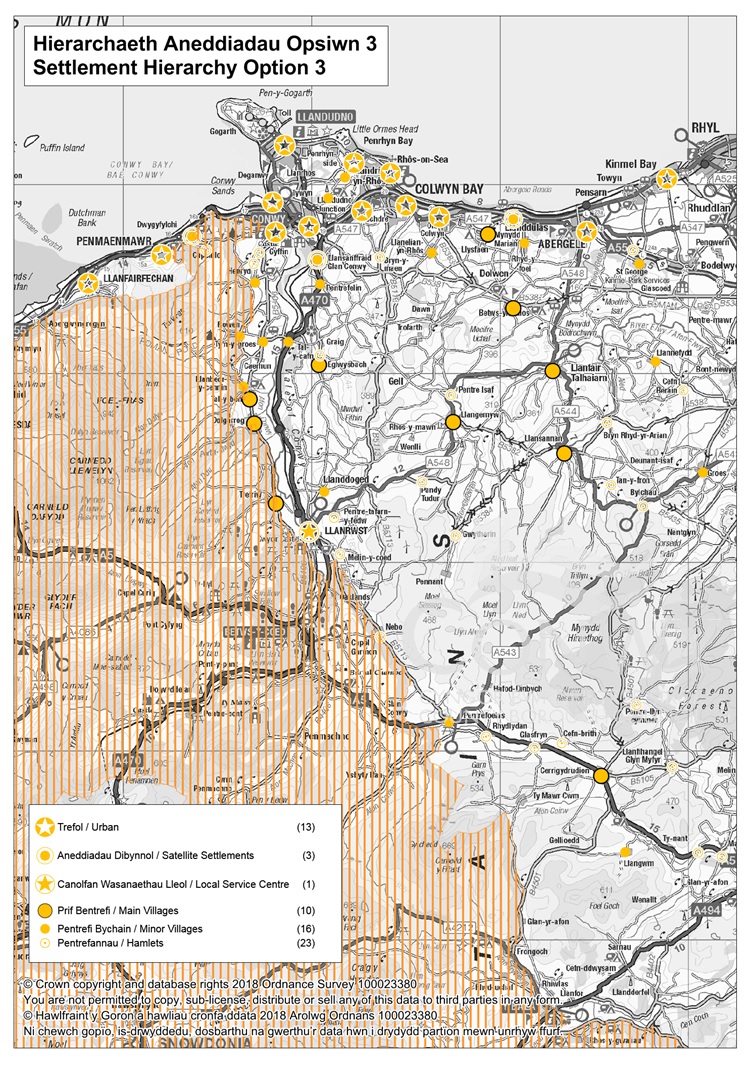 This approach identifies the hub as shown by the Wales Spatial Plan and groups the Primary Key Settlements followed by those other Key Settlements in the coastal conurbation. The following categories remain the same. The majority of the LDP Area falls within the North East Wales Strategy Area of the Wales Spatial Plan. In addition, several settlements are either fully within the North West area, such as Llanfairfechan and Penmaenmawr, or fall in the area shared between both regions (Llandudno, Conwy, Llandudno Junction, Colwyn Bay and Llanrwst). This means that these cross-boundary settlements are strategically placed for connecting the two areas of Wales and beyond; via links to England and Ireland. Llanrwst has the added distinction of linking to a third Strategy Area: Central Wales. Llanrwst is considered unique within the county being a rural service centre which is a main town for several outlying villages, both within and outside of the plan area. 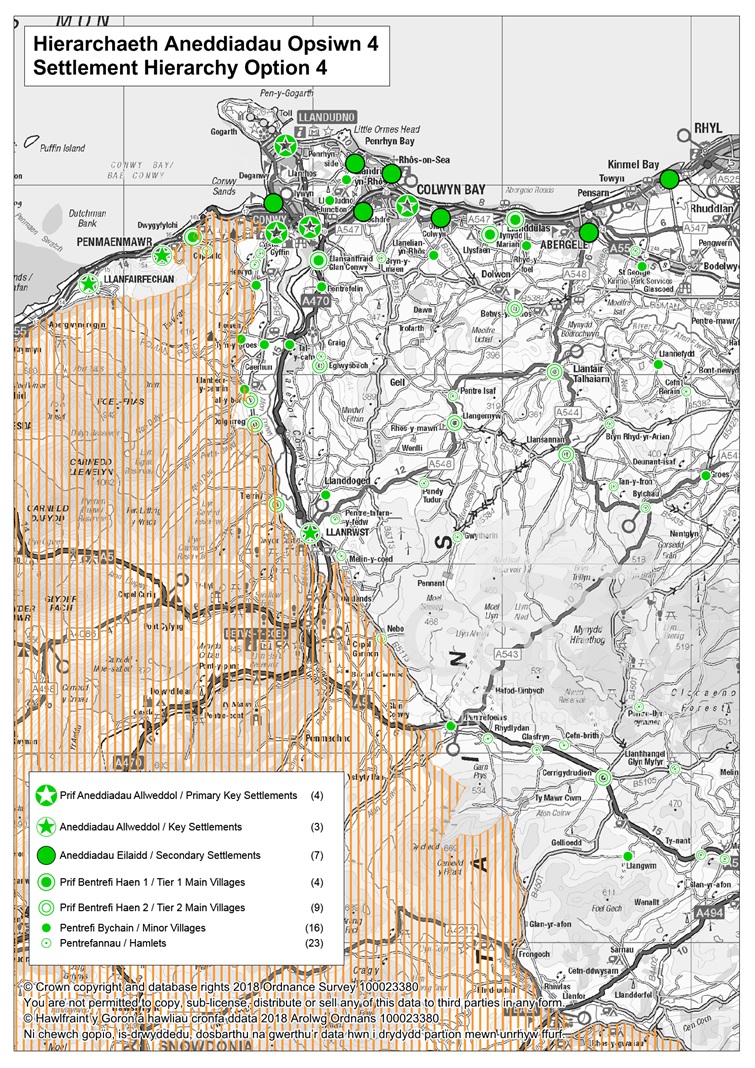 This option takes brings forward the WSP approach along with accessibility and sustainability of current rural locations to urban areas, especially those in close proximity to the A55 corridor. These settlements may not have a full suite of facilities themselves however their close proximity to key and secondary settlements allows considerable interrelations for services. The approach reflects the constraints to the East of the County Borough and promotes a new Settlement Hierarchy that would potentially have the necessary capacity and available infrastructure to contribute to sustainable development. Llanrwst is considered unique within the county being a rural service centre which is a main town for several outlying villages, both within and outside of the plan area. 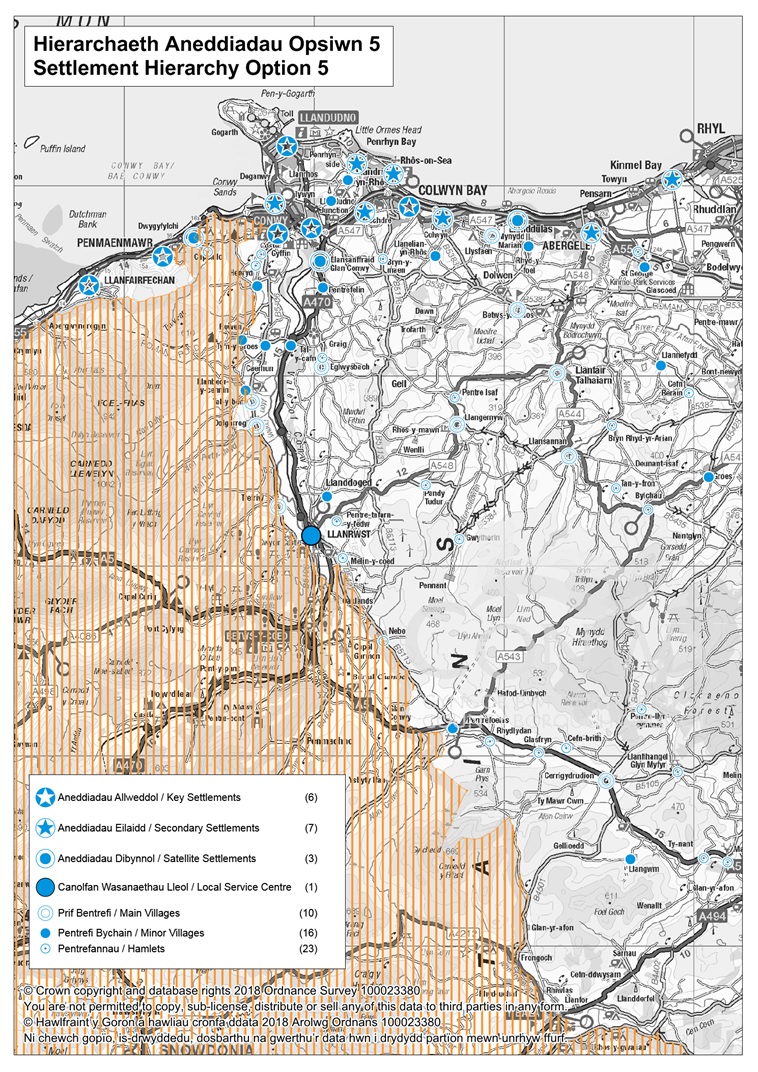 (3) Question 1: Which Settlement Hierarchy do you consider to be the best option? (Refer to Background Paper 3 'Hierarchy of Settlements' for greater assessment of the Options)

(4) Question 2: Are there any other settlement hierarchy options you would like to put forward?